The future of Christchurch's heritage

I have been meaning to write a piece on the overall state of heritage in Christchurch and where this has left the city and country regarding its relationship with heritage buildings. However, when I was waiting for a friend in a supermarket yesterday, I came across this article in NZ and Oz’s National Geographic (issue 121, May/June 2013) by Sally Blundell, and I think she phrases it far better than I ever could. This is just a little peak, and if you are kiwi, then I please ask that you go out and buy the article (there are some really awesome images), as this is more for those in the northern hemisphere. Thanks.

What will become of Christchurch’s Fallen Glory?

“In Christchurch, there is now bare land aplenty. What was once a masterclass in this country’s architectural history, from the much-vaunted neo-Gothic structures through to the distinctive “Canterbury school” of mid-twentieth century modernism, is now a checkerboard of leveled sites. Some buildings damaged by the city’s earthquakes, such as the fine collection of Gothic Revival buildings that make up the Arts Centre, are quietly getting on with long-term and costly restoration programmes. Some, including the Cathedral of the Blessed Sacrament (c.1910), the Christchurch Cathedral (1881-1904) and the Provincial Council Buildings (1858 – 1865), still await a decision as to their fate. 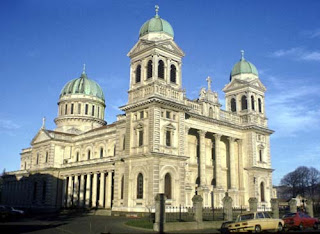 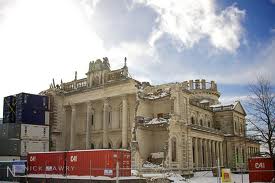 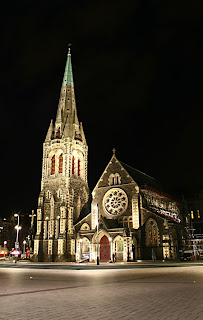 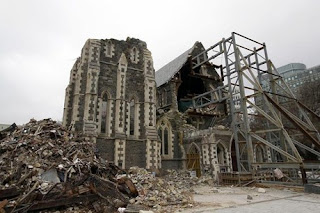 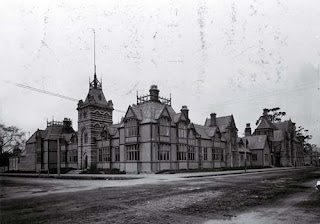 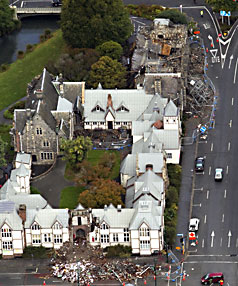 (all of the above images are from Google)

But as of March 2013, over 220 of the city’s heritage buildings, including 102 buildings on the NZHPT register, have been demolished, as well as many partial losses. The 1875 Lyttleton Post Office, the 1876 Cramner Court, the 1894 Librarian’s House, the 1903 Horse Bazaar, the 1905 Manchester Courts and former Royal Exchange – Christchurch’s roll call of lost heritage is long [and rising].
“it’s just that desire to demolish” says Haliiday, “to ignore the fact that there are a whole lot of cultural, social and historic values embedded in the fabric of this city. Why? Is it because we don’t tell our stories, because we think we are too young? It’s astonishing that we aren’t so moved to want to acknowledge, protect, celebrate and discuss the work of our ancestors.”
It is astonishing. New Zealand is a signatory to the 1972 UNESCO Convention on the Protection of World Cultural and Natural Heritage, which requires states to protect and conserve cultural and natural heritage.
In New Zealand, state and local government policies extol the importance of heritage in defining individual and communal identity, providing continuity and stimulating economic revitalization.
Empty words? Although the majority of Christchurch’s earthquake fatalities occurred in 1960s and 70s buildings, heritage has paid a high price for the tectonic upheavals. In the immediate aftermath of the September 2010 and February 2011 earthquakes, buildings considered a threat to public safety were demolished under emergency powers, with no opportunity for controlled deconstruction and salvage and little discussion with owners. Legislation in the new Canterbury Earthquake Recovery Authority (CERA) suspended the heritage protection measures enacted under the Resource Management Act and further reduced the role of the Historic Places Trust in relation to historic buildings to an advisory function. In the meantime, red-stickers and a cordon around the no-go red zone of the inner city left owners of historic buildings watching on in frustration as their properties succumbed to the onslaught of rain, snow, fire, (some 11,000) on-going aftershocks and a Government-led resolve to restore the economic life of the city as quickly as possible. Under the Canterbury Earthquake Recovery Act, owners of damaged buildings can be issued with a “Section 38” letter, effectively giving them 10 days to come up with a make-safe or demolish plan."

10 days to come up with any form of plan for a historic building is a daunting prospect and this excerpt reveals the level of work that Christchurch has had to bear to in order to deal with the results of the earthquakes a few years ago. And this is purely from a heritage point of view, not counting anything later than 1920.  At home, the worst natural disasters are floods and fires, and whilst these can cause huge issues and devastation regarding the survival of historic buildings, working here has really highlighted how tame the geology of the United Kingdom technically is.

Posted by Charlotte at 16:52 No comments:

College Hall Gets A Facelift

So autumn has officially arrived in Christchurch, we have had rain for the last 4 days (not that I expect any sympathy from those back home) 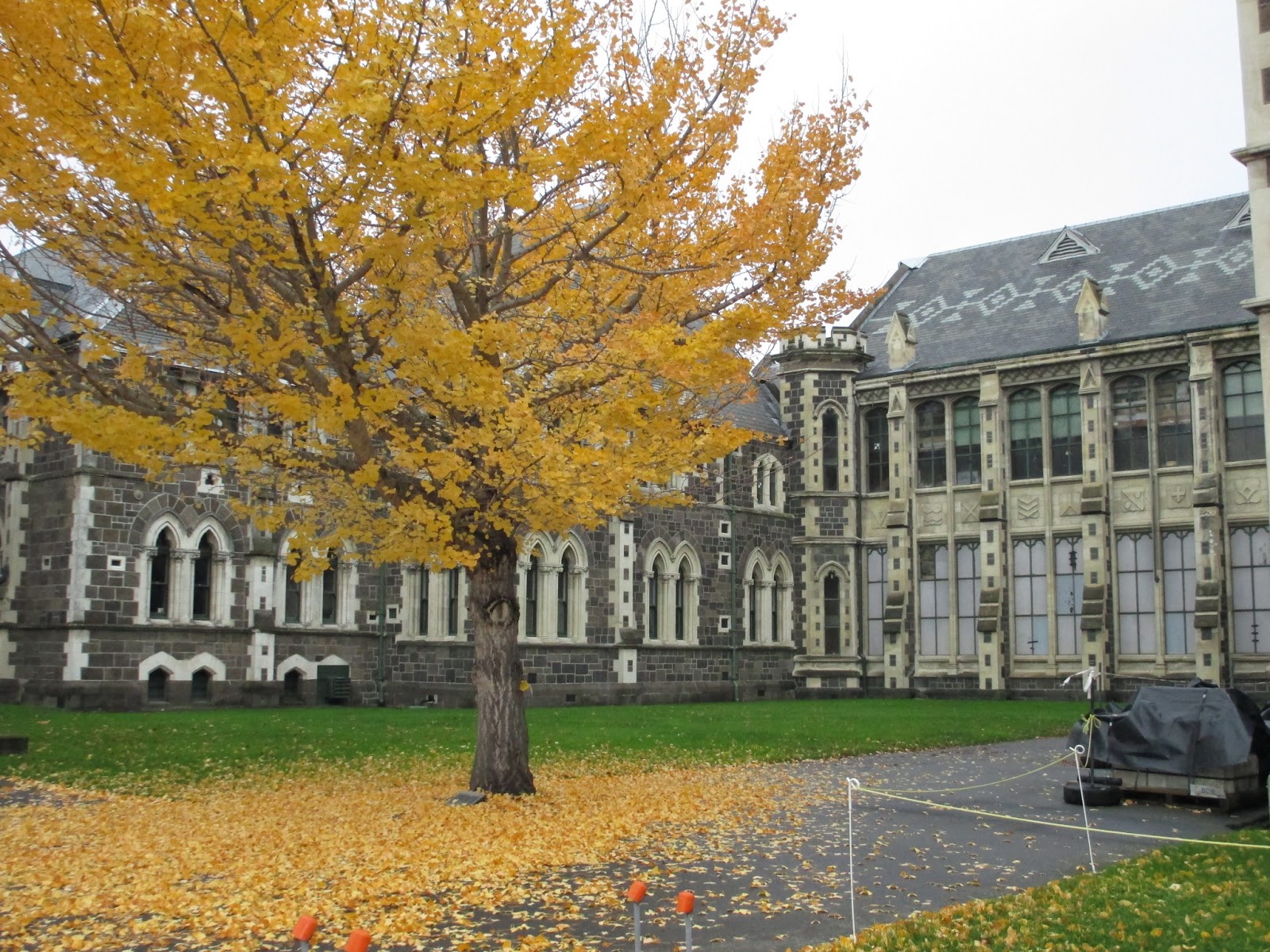 We have had some new stonemasons starting recently, and as they were working on the inside of the College Hall (and not in the rain) I thought I would trundle along and see what they were up to.

They are tidying up the internal limestone on the upper half of the College Hall, giving it a facelift as it were. 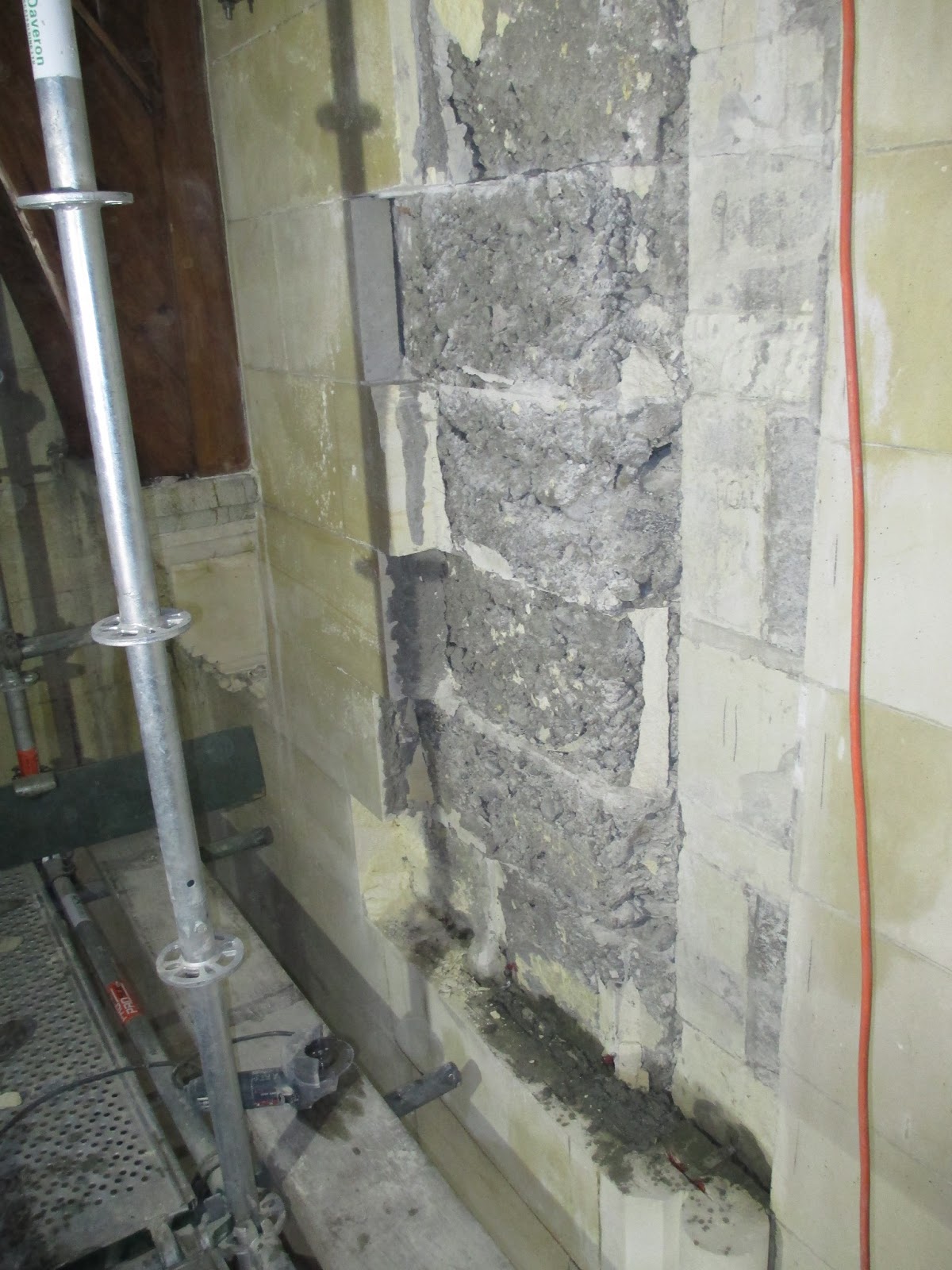 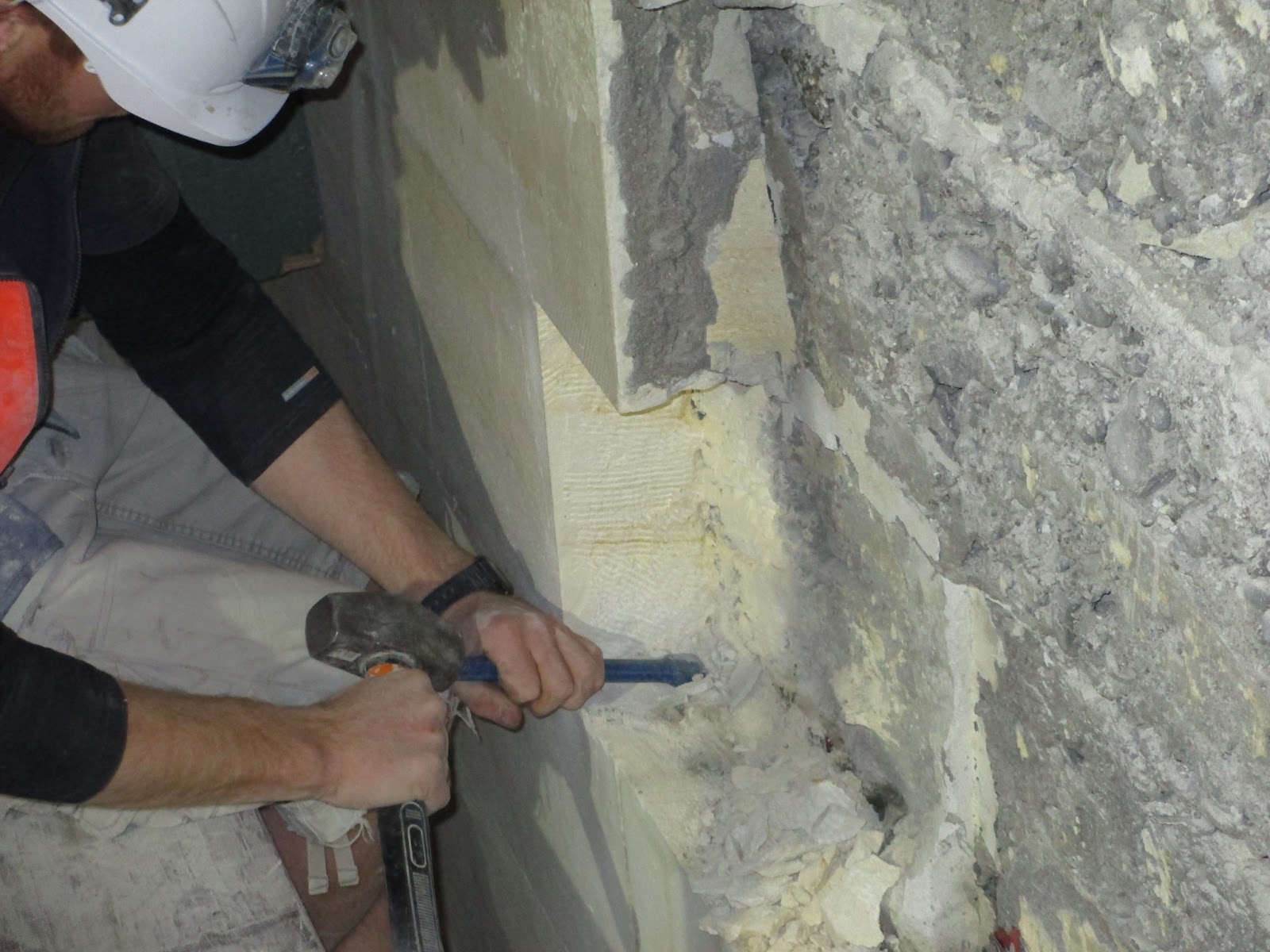 The majority of the original stone had already been removed and the final touches were just being done using a very impressive looking chisel (it had teeth!).  Apparently, this makes it easier to get larger pieces of stone off in one go and allows more control as the base is wider, than the traditional flat chisel. So there you go.

Using a cement mortar, which looked a lot better than the stuff they used originally - check out the size of the pebbles: 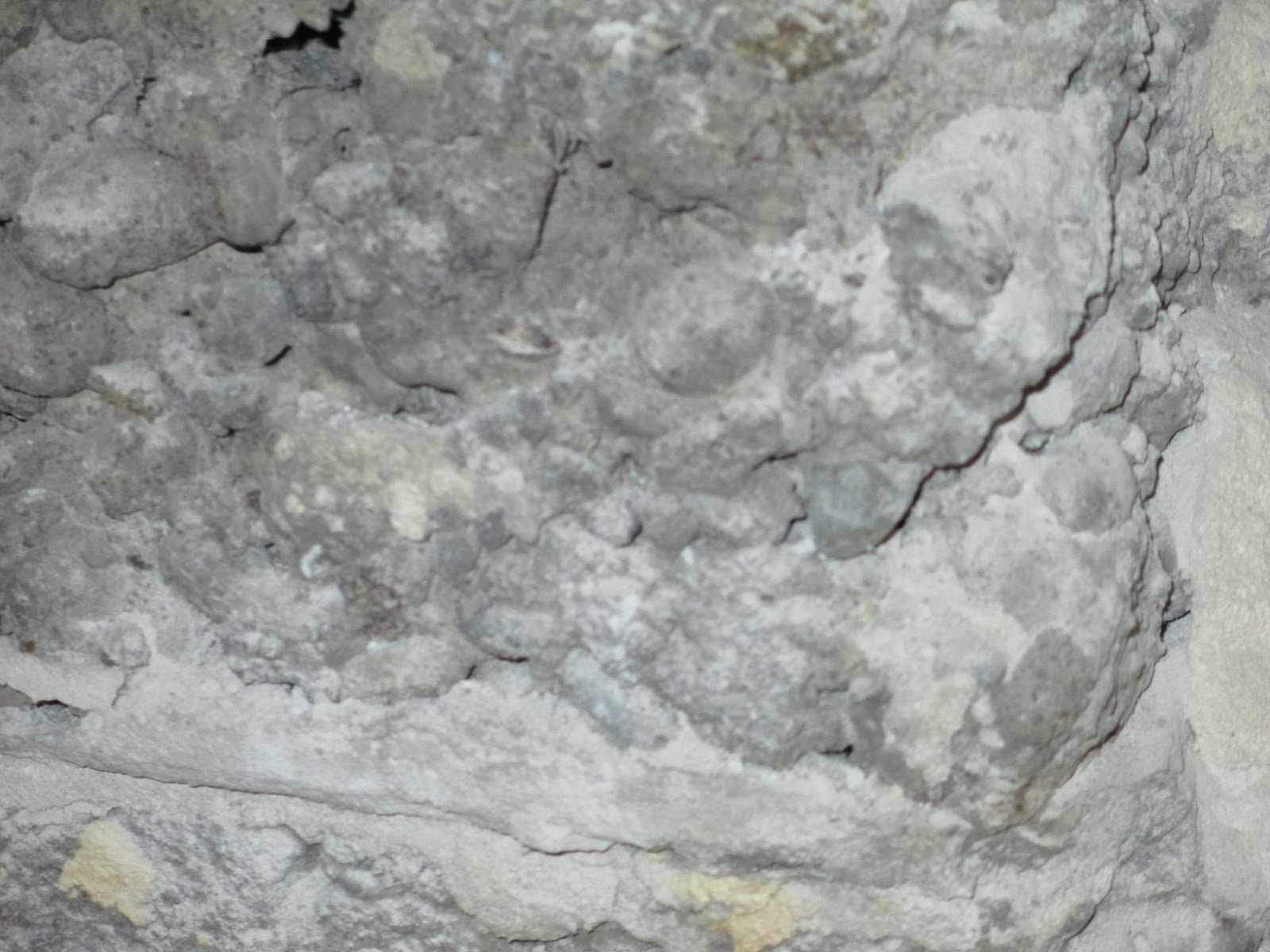 a mixture of new and old limestone blocks are being re-inserted and also stapled to the existing facade. 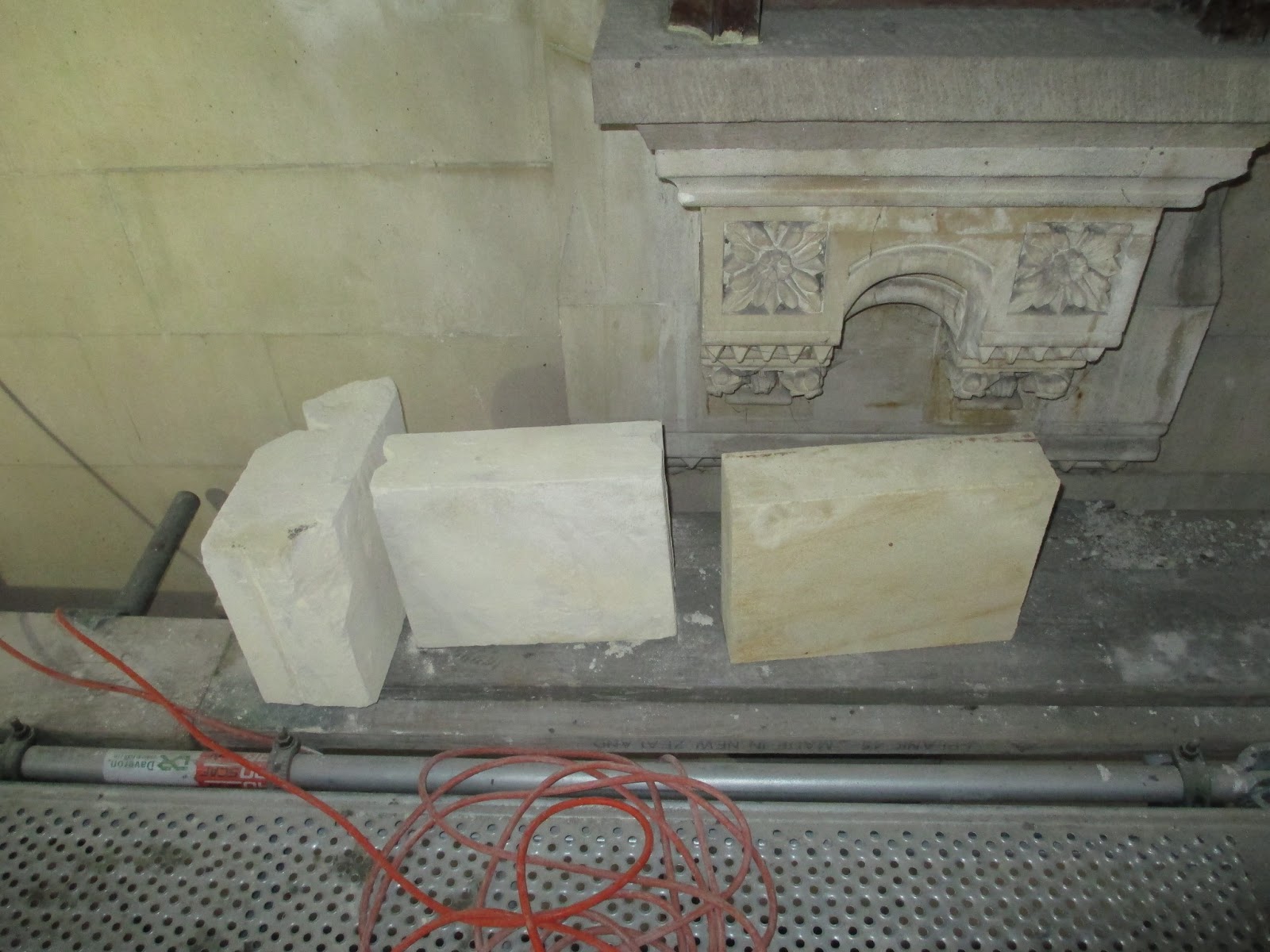 The one of the left is new, the other two are original. You can see the indents at the end where the original cement mixture has been chipped away. 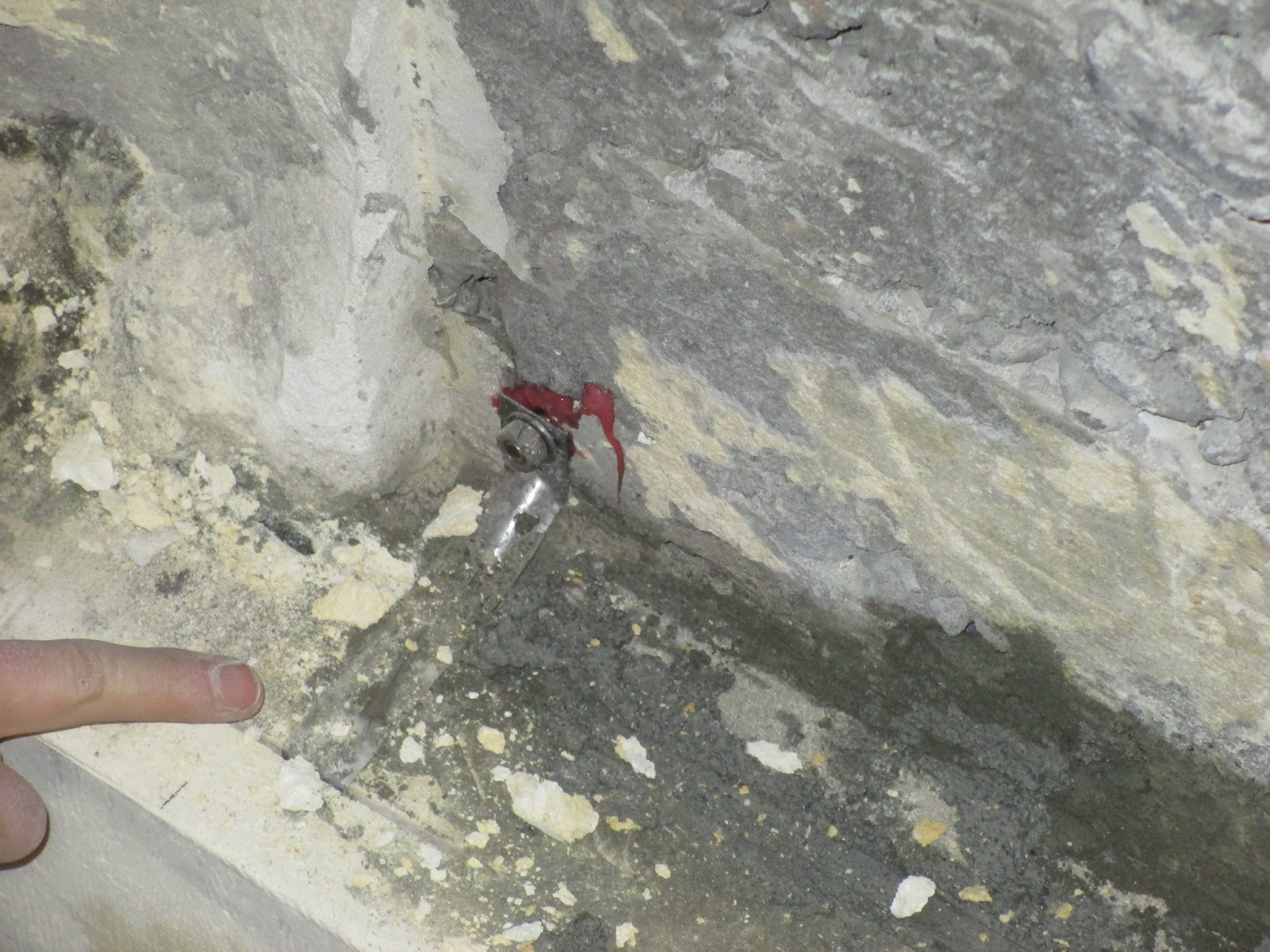 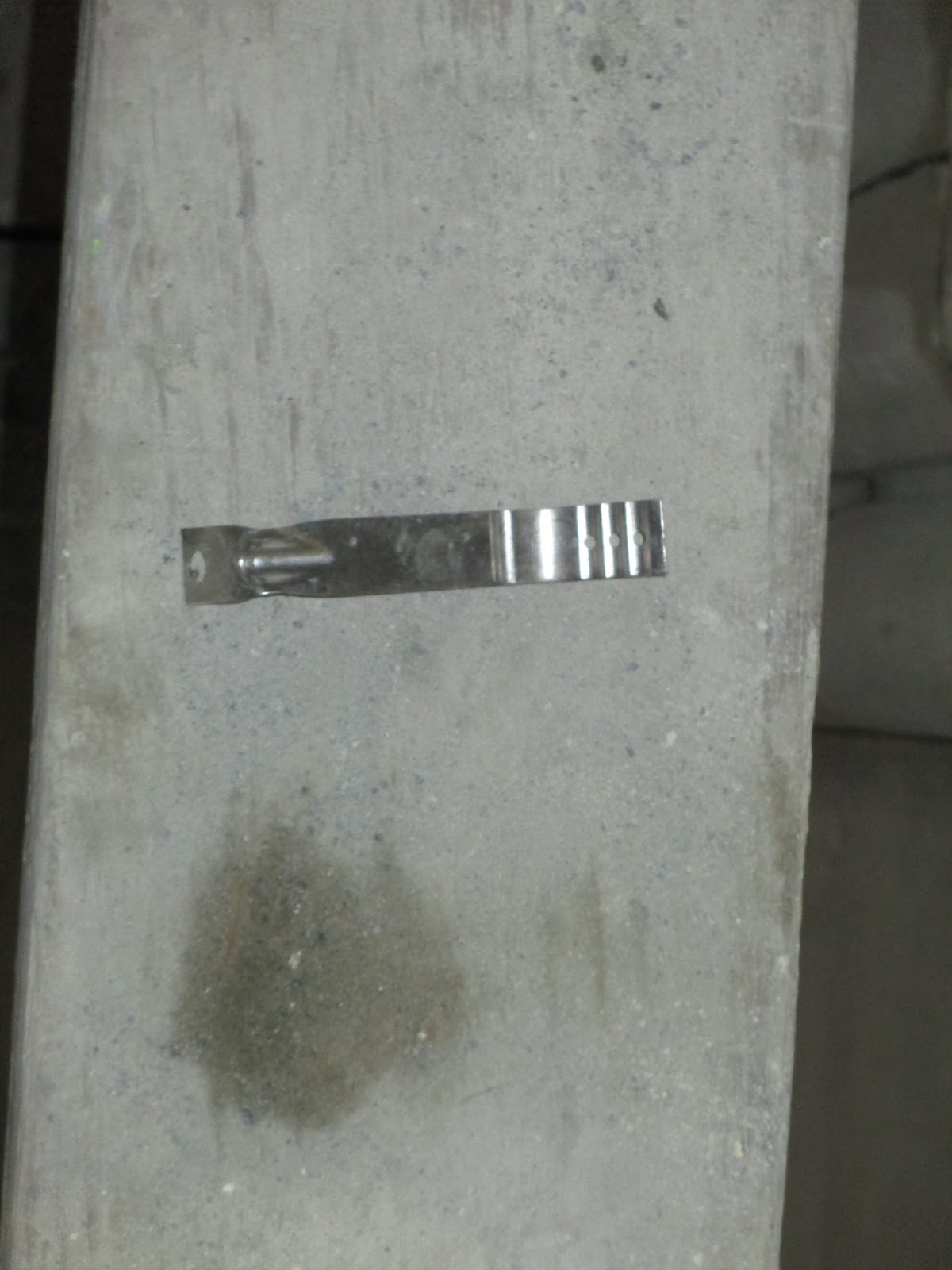 a staple! a little bit sturdier than your average paper ones. 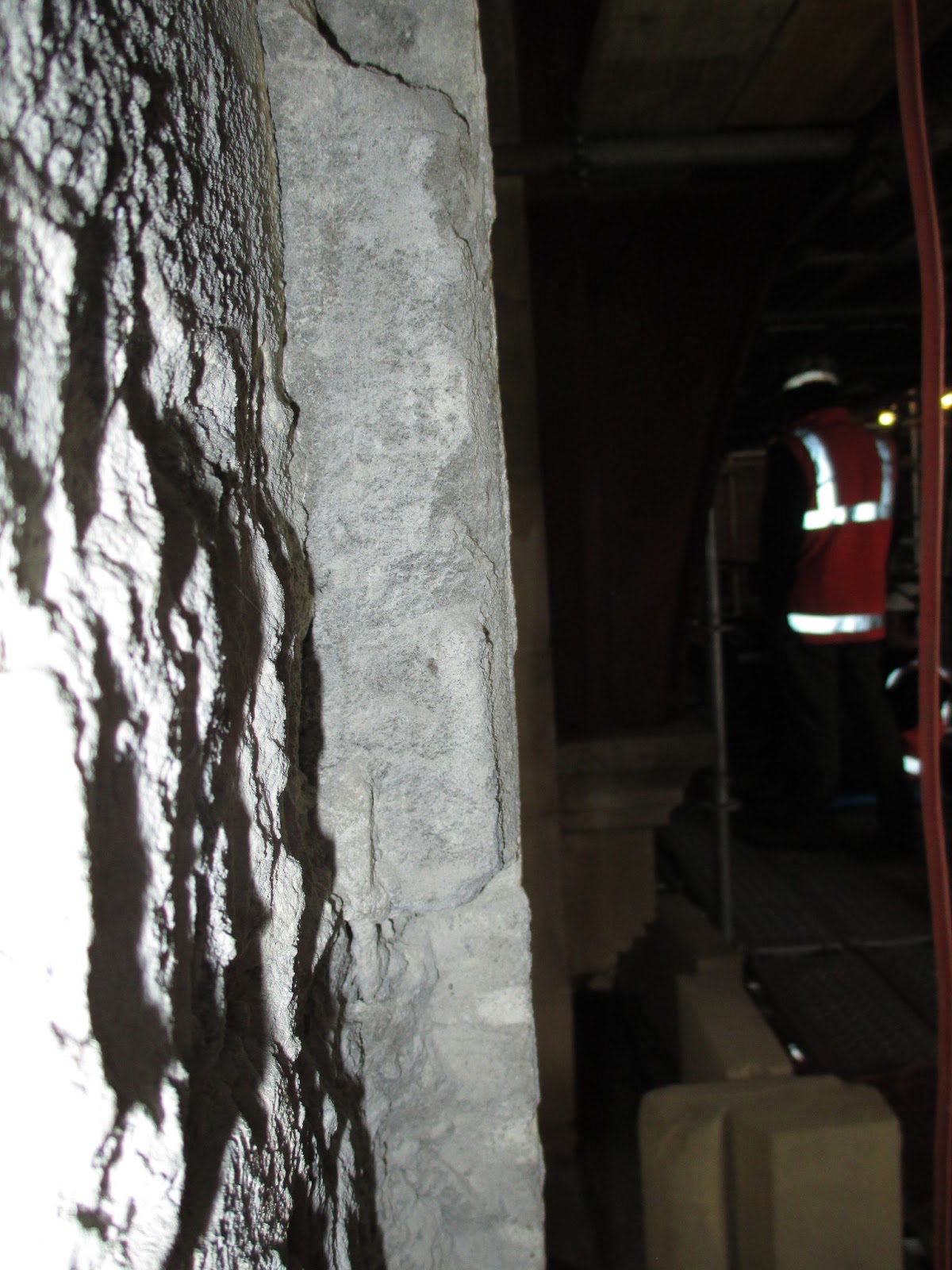 How thick part of the existing wall isn't - some of the stone was just used as a face, rather than providing any structural element. 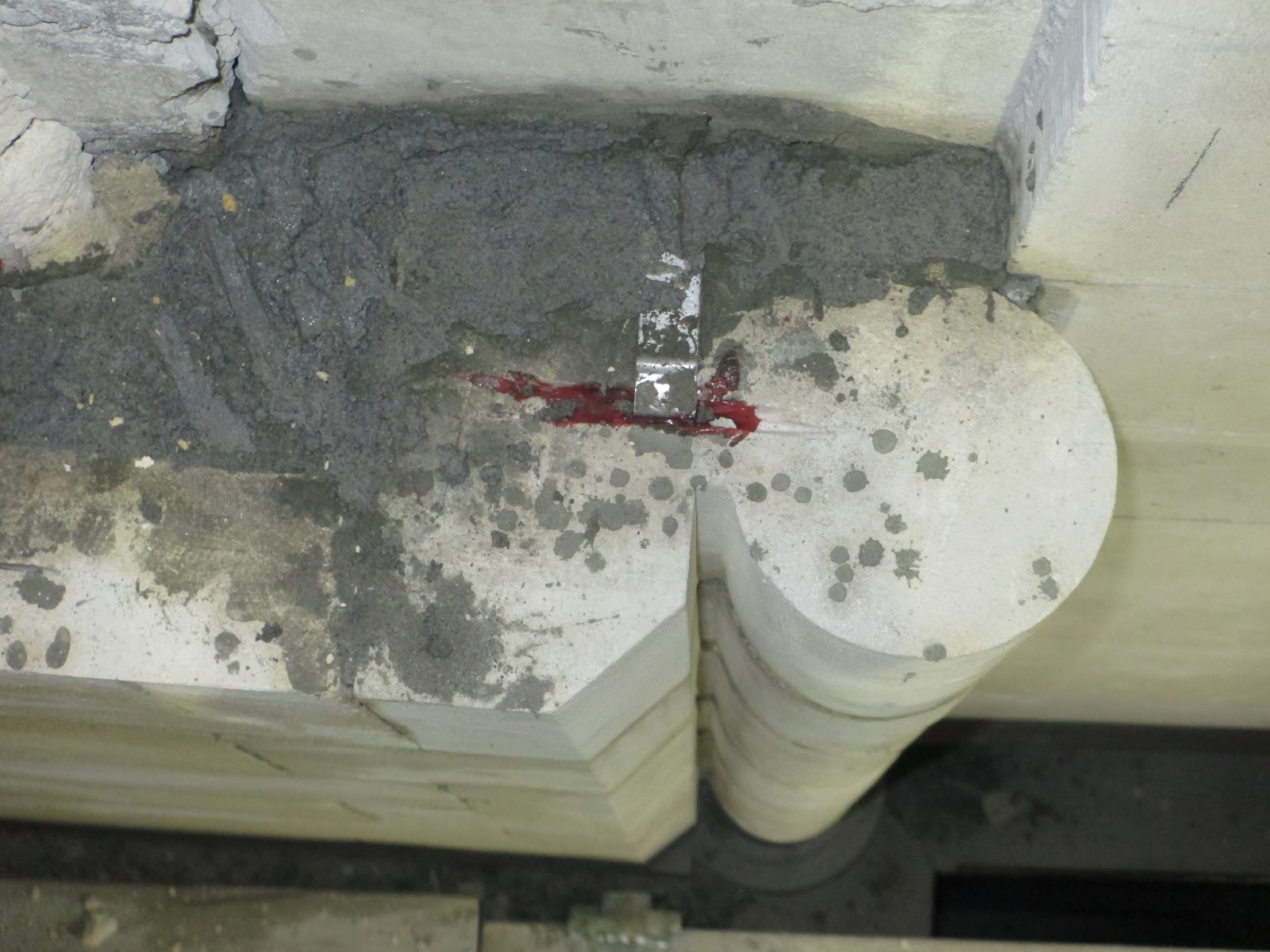 View of the carved collonette, looking down, and the new cement mix. 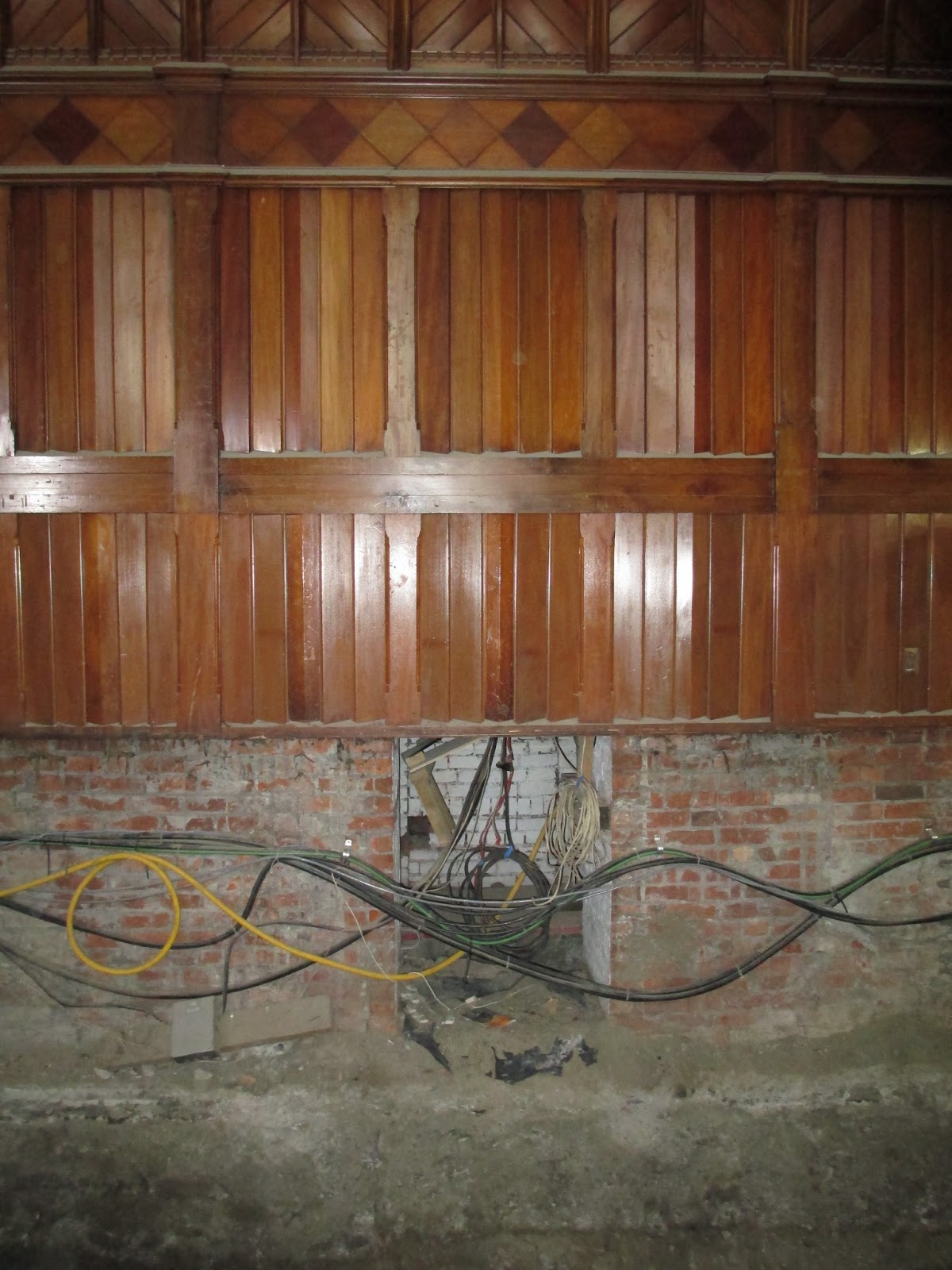 Random hole behind the organ, I am not sure what this is for and as there was a rather large excavation pit in the way I could not go and explore. 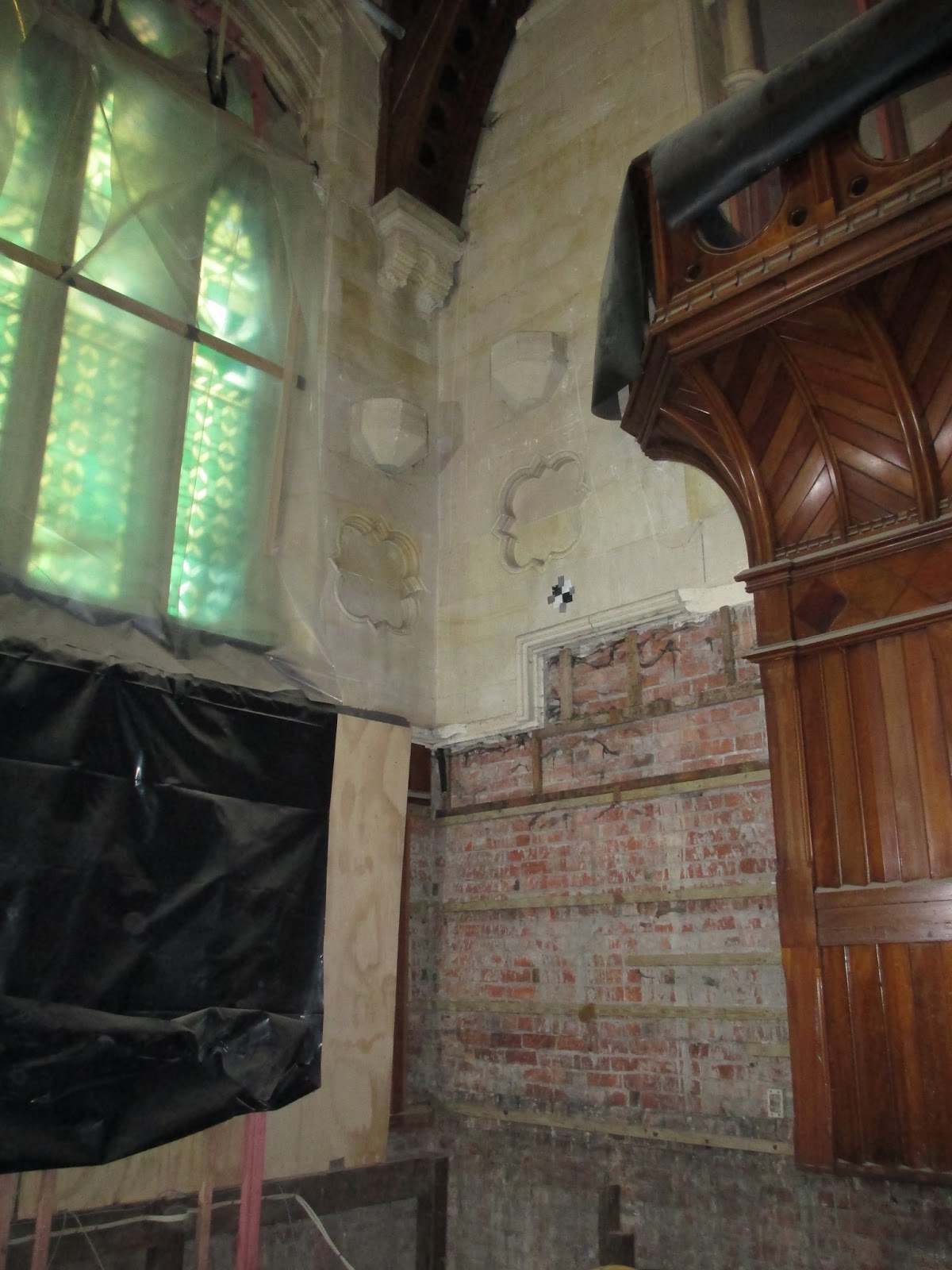 Use of brick as a form of saving on expenditure. This area was originally paneled with five forms of native timber and will be put back again when strengthening work has finished.


Curving away from the College Hall, in my last post I mentioned that I was doing some stone work that will go up on the building. Well..... here they are in all their finished glory. 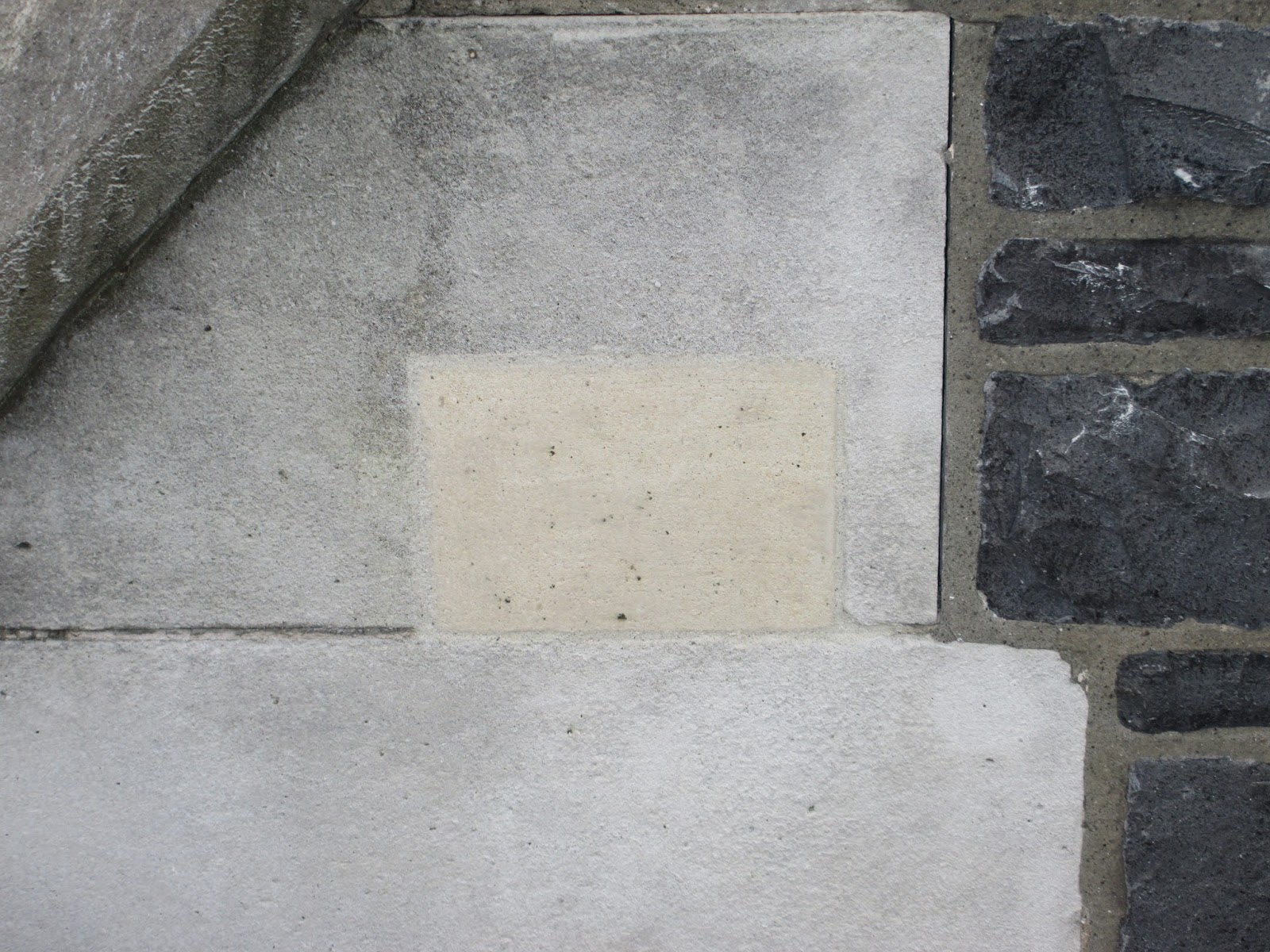 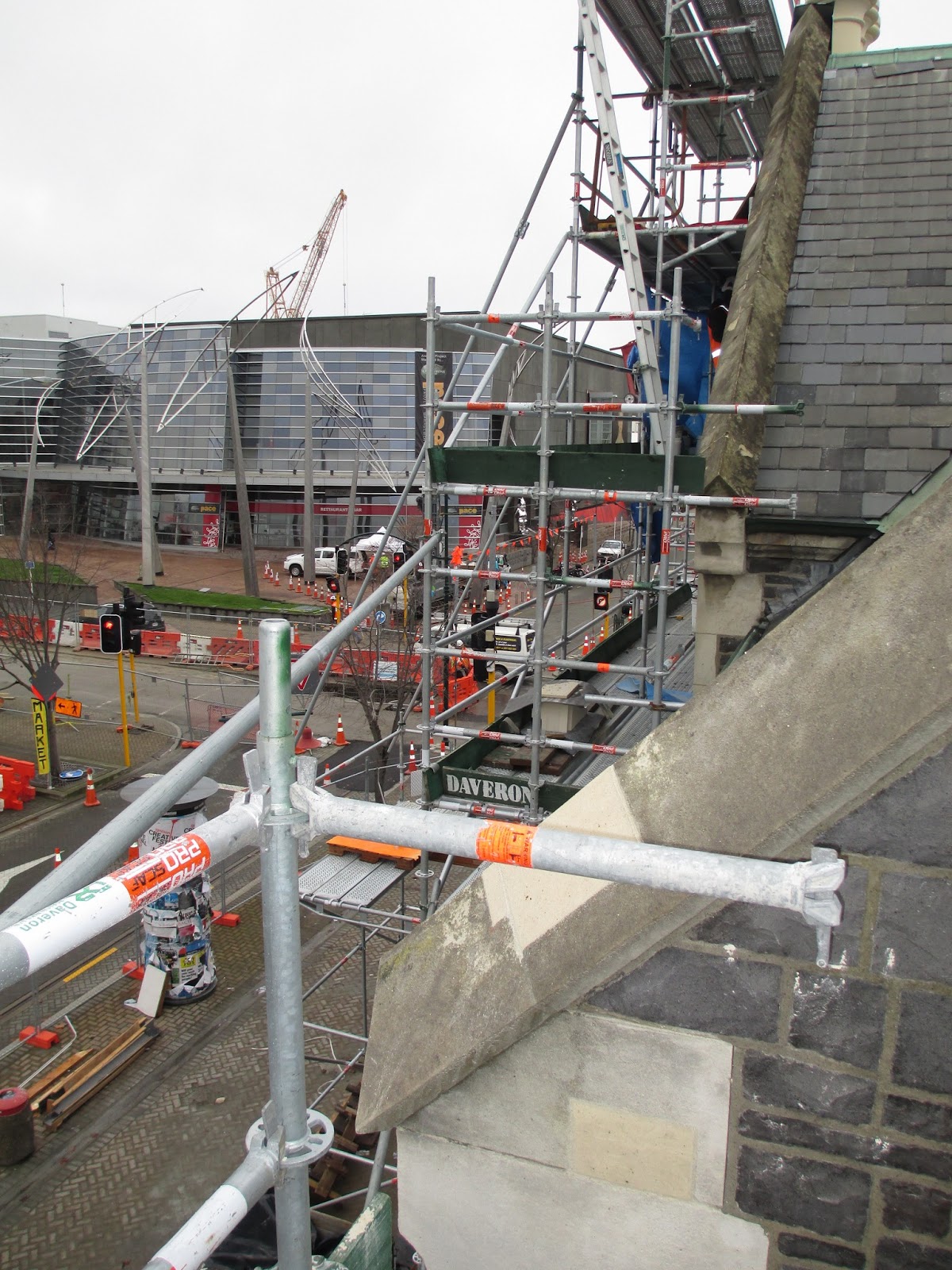 Sat on top of the western gable on the Registry building, they will not be seen from the ground, but I know they are there... and they FIT!

Apologies for being away so long, things have been a little hectic!

Work is moving along swiftly at the Arts Center.  Work on Boys High is about to begin and plans for the Chemistry building are under discussion, which is very exciting.

I was allowed back in the carving tent the other week, and I was given a new challenge - to create a corner string course. It is not going up on the building (but I am doing one that is, and I will keep you all posted on that little project), but I have to say after faffing around and staring at it for ages trying to figure out the logistics of how it was going to work, I pretty pleased with the end result.

Check out this little beauty: 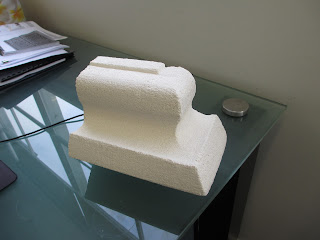 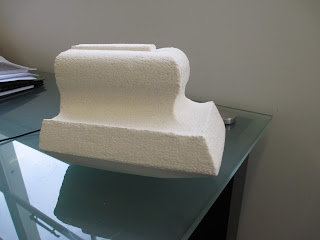 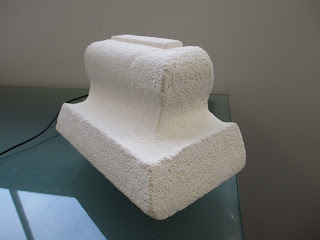 It's not completely level, but still, isn't it gorgeous (if I do say so myself!).

Posted by Charlotte at 15:57 No comments: